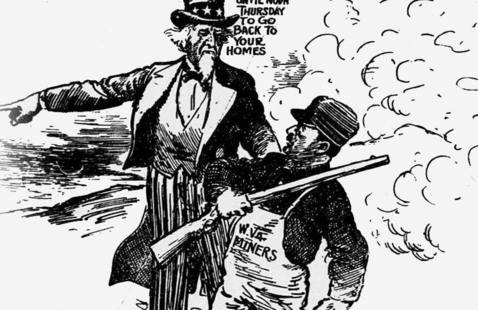 Mineral Resources Building, Watts Museum View map
Add to calendar
Save to Google Calendar Save to iCal Save to Outlook

The Watts Museum is pleased to announce a new exhibit, organized as part of the statewide commemoration of the Battle of Blair Mountain Centennial in 2021. The exhibit, Drawing the Battle Lines: Editorial Cartoons from the West Virginia Mine Wars, runs until July 1, 2022.

Drawing the Battle Lines features editorial cartoons depicting the divisive issues that triggered the West Virginia Mine Wars. In the first two decades of the 20th century, coal miners and coal companies in West Virginia clashed in a series of brutal conflicts over labor conditions and unionization, known as the Mine Wars. These violent conflicts included shootouts, armed marches, murders, and the 1921 Battle of Blair Mountain, which was the largest civil insurrection in the United States since the Civil War.

Using sources that range from the mainstream to the radical, the exhibition explores the role of print media in the struggle for labor rights. As miners, politicians, citizens, and soldiers took sides in this decades-long fight, these illustrations reveal how cartoonists expressed their own views on clashes in the coalfields, while also shaping public perception of the events.

The Watts Museum is open to the public every Monday, Wednesday, Friday, and Saturday from 1:00-4:00pm. The museum is closed on WVU holidays.